This is going to be a first folks, so please bear with me.  A couple of days ago a YouTube video went live on Facebook (at least it was new to me) and being a fancy baker in what spare time I have, I absolutely couldn't resist following the recipe and method to make these tempting and beautiful dessert morsels.

The "first" part comes in because although I've been baking and creating fancy desserts for more years than I care to count, I've never been organized enough or remembered to take photos as I went.

When I Googled 'pastry roses' I came up with quite a few hits - several with recipes, some links to blogs, a whole raft of images, etc., so what you're going to see in the photos that follow isn't new, nor is the recipe mine, but I wanted to try my hand at both the baking and creating the tutorial as I went along.  So.... here goes!

This first photo is of the basic ingredients - one puff pastry sheet (nationally known brand) two apples, some lemon juice and a little cinnamon...  Oops, I forgot to put the apricot preserves in the photo..... more about them later.  And if you want to see larger photos just click on each one for a closer view. 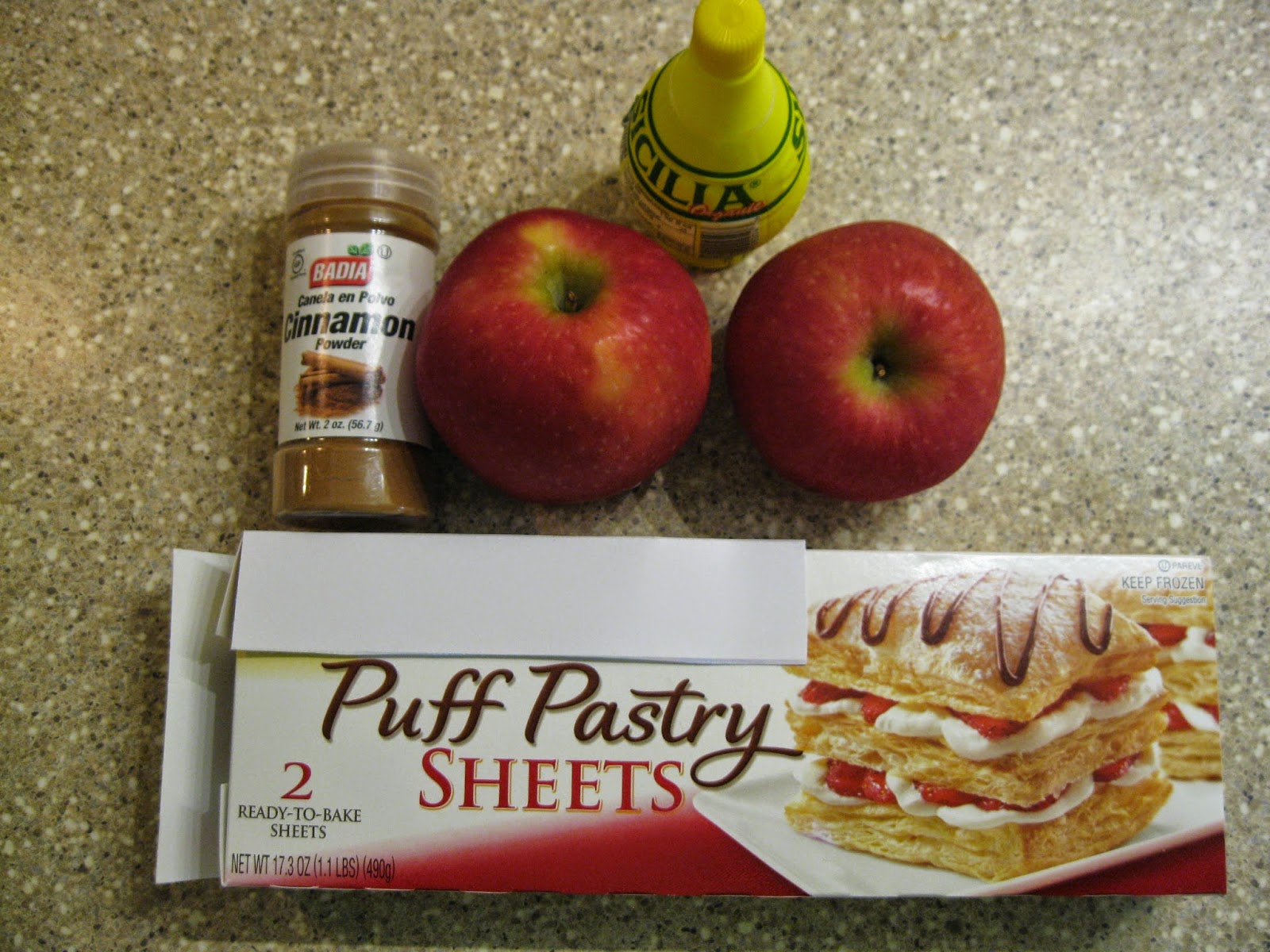 Here are two nice crisp apples cut in half cored, then sliced crosswise into the thinnest possible slices you can manage.  Mine were a bit thick and later in the process I discovered why very thin slices are best. 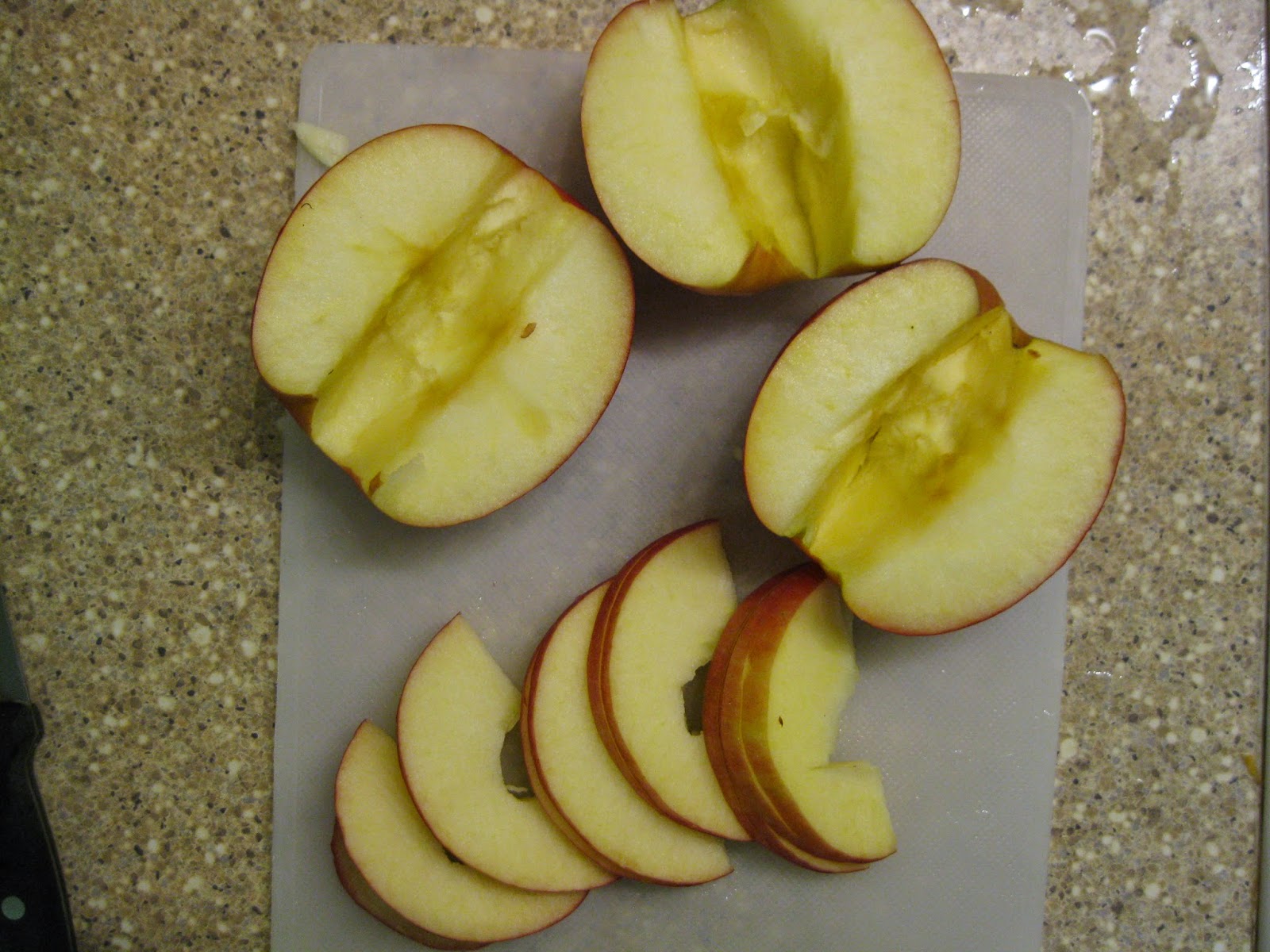 Apple slices in a microwave safe bowl with enough water to almost cover and a few squeezes of lemon juice.  The recipe calls for fresh lemon juice but I used the kind in the little plastic lemon that sits waiting in the fridge for when you just need a little lemon juice.
I microwaved the water and apple slices for the three minutes the recipe called for, but with my thicker slices, could have gone to three and a half minutes. 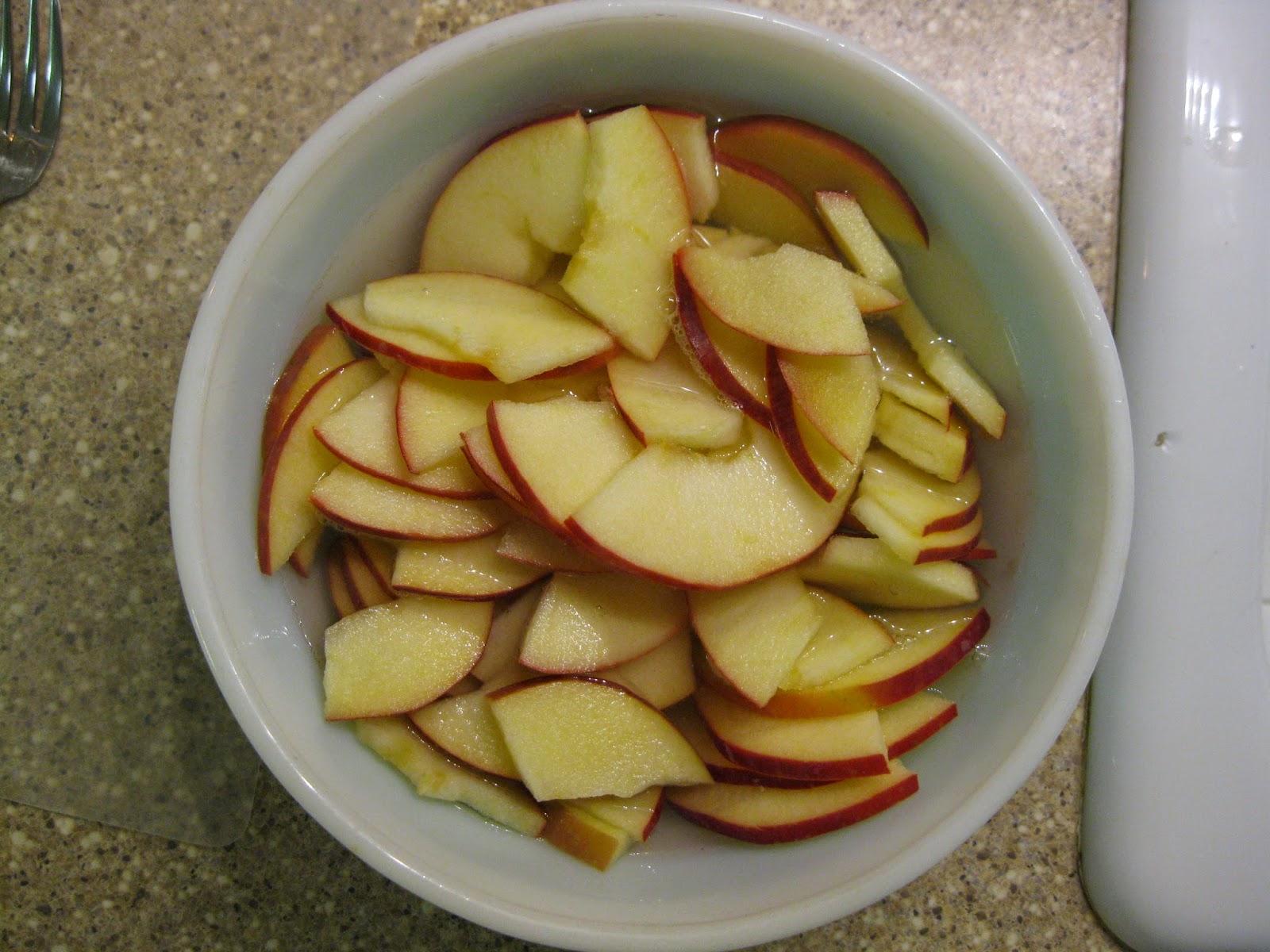 I drained the slightly cooked apple slices for a few minutes and then turned them out onto several layers of paper toweling to cool and dry out a bit. 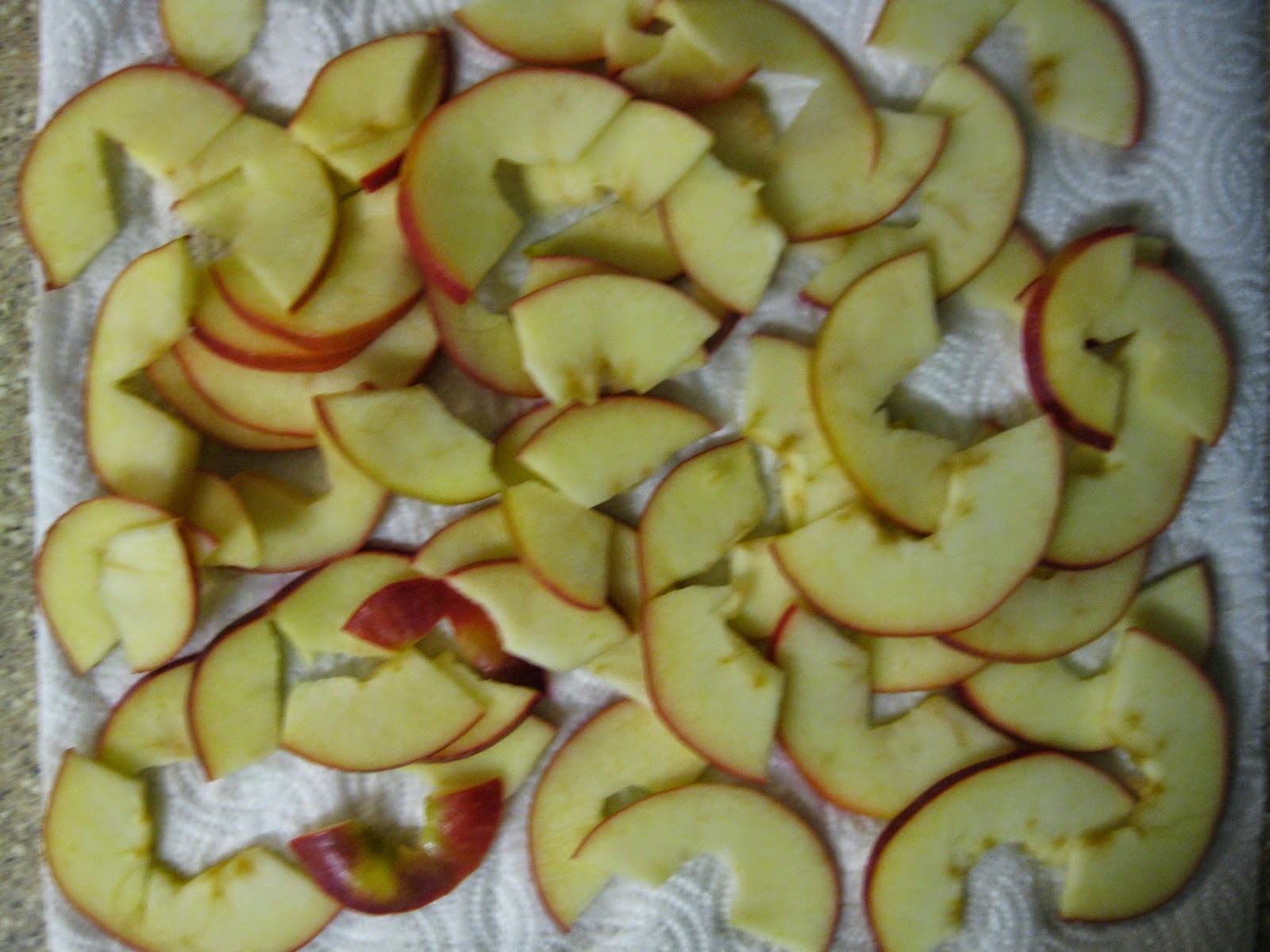 And now for the pastry!!  Follow the directions on the package to thaw one sheet of puff pastry.  This takes about 40 minutes.  I rolled it out to a shape long enough to cut six strips of dough each about three inched wide.  Be sure to use plenty of flour!!! 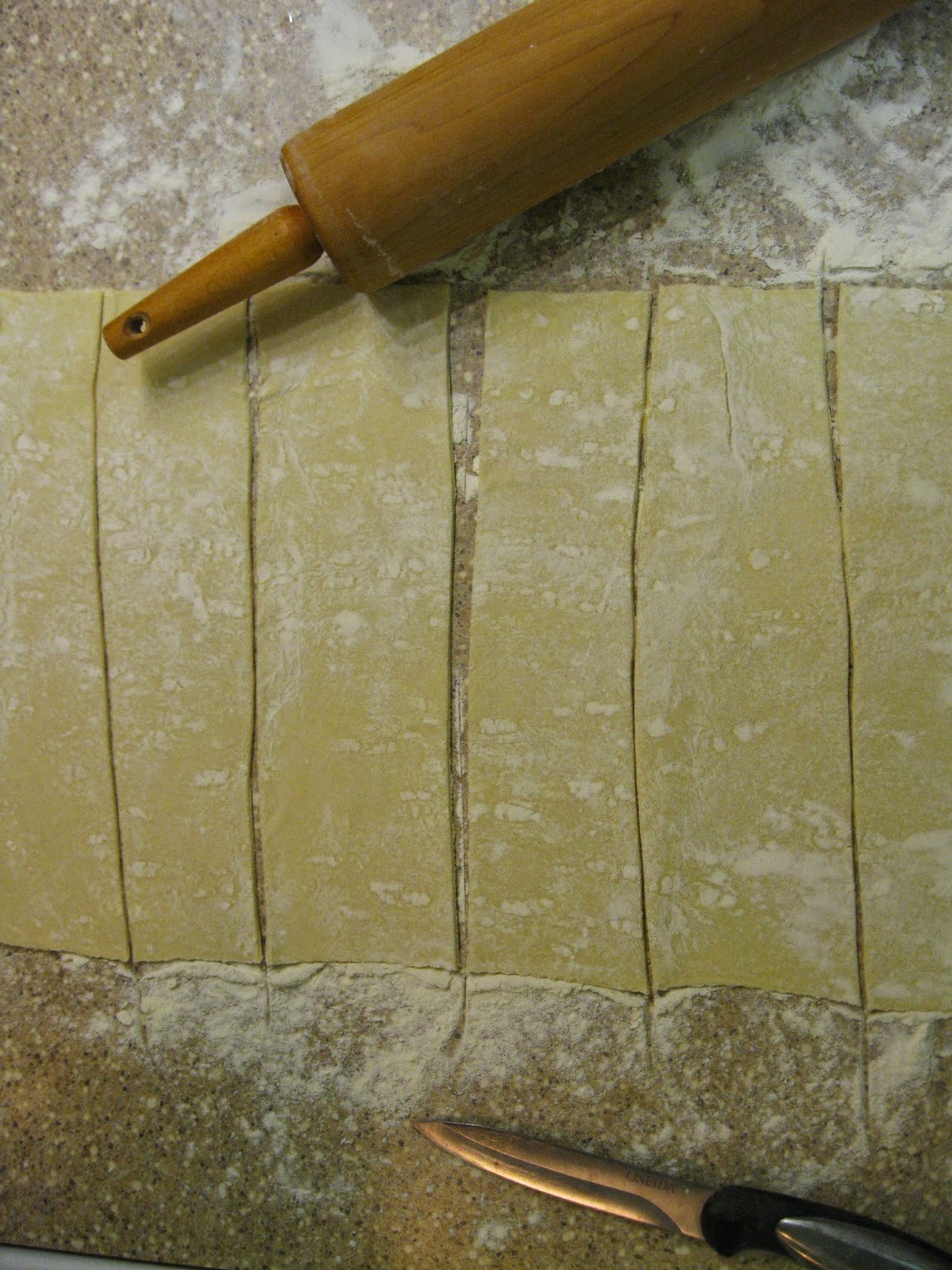 Now for the apricot jam - about two tablespoons mixed with two teaspoons of water and microwaved for one minute. 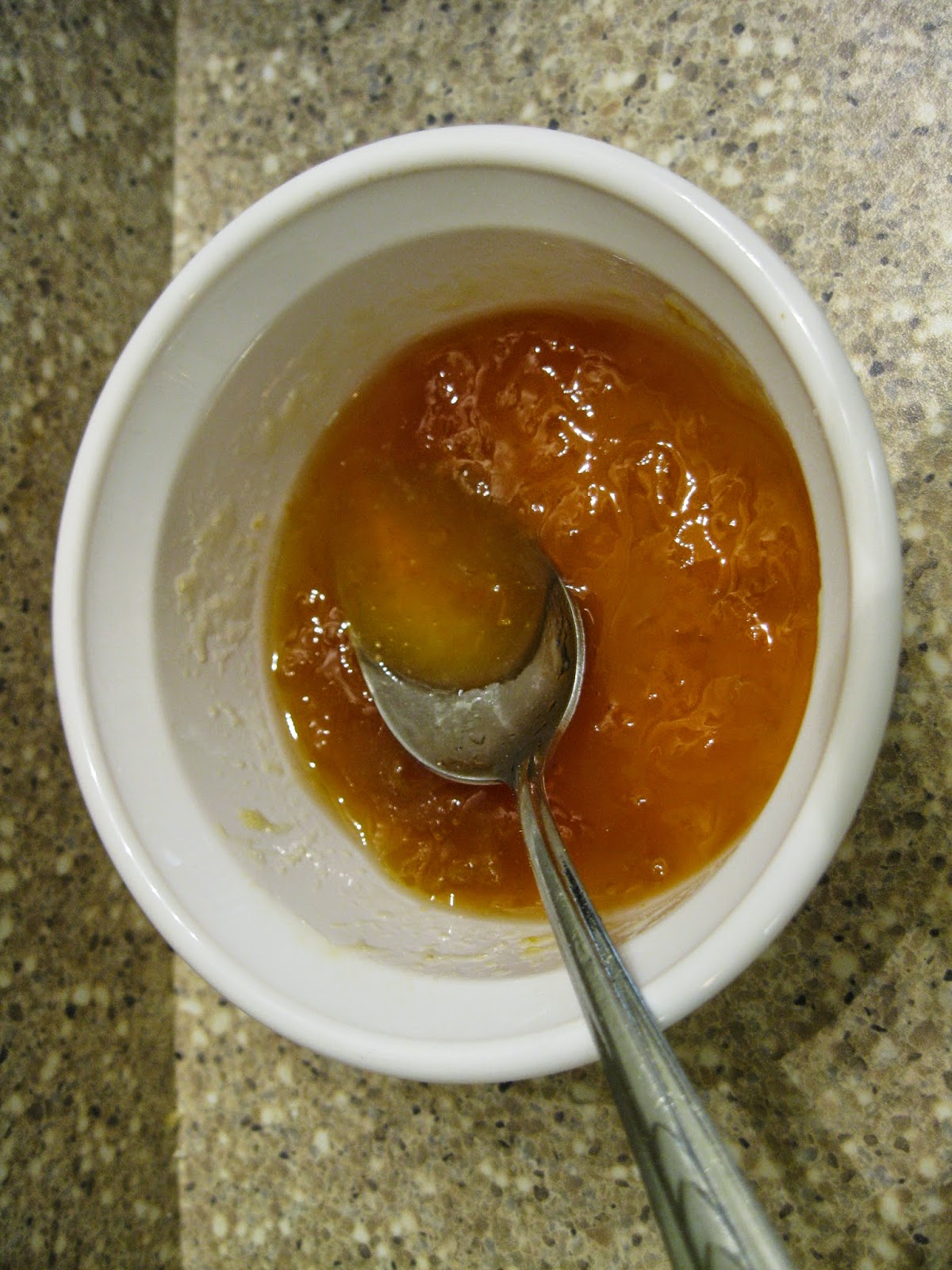 Spread a little of the jam mixture on each of the six strips of dough - a few lumpy bits of apricot are OK. 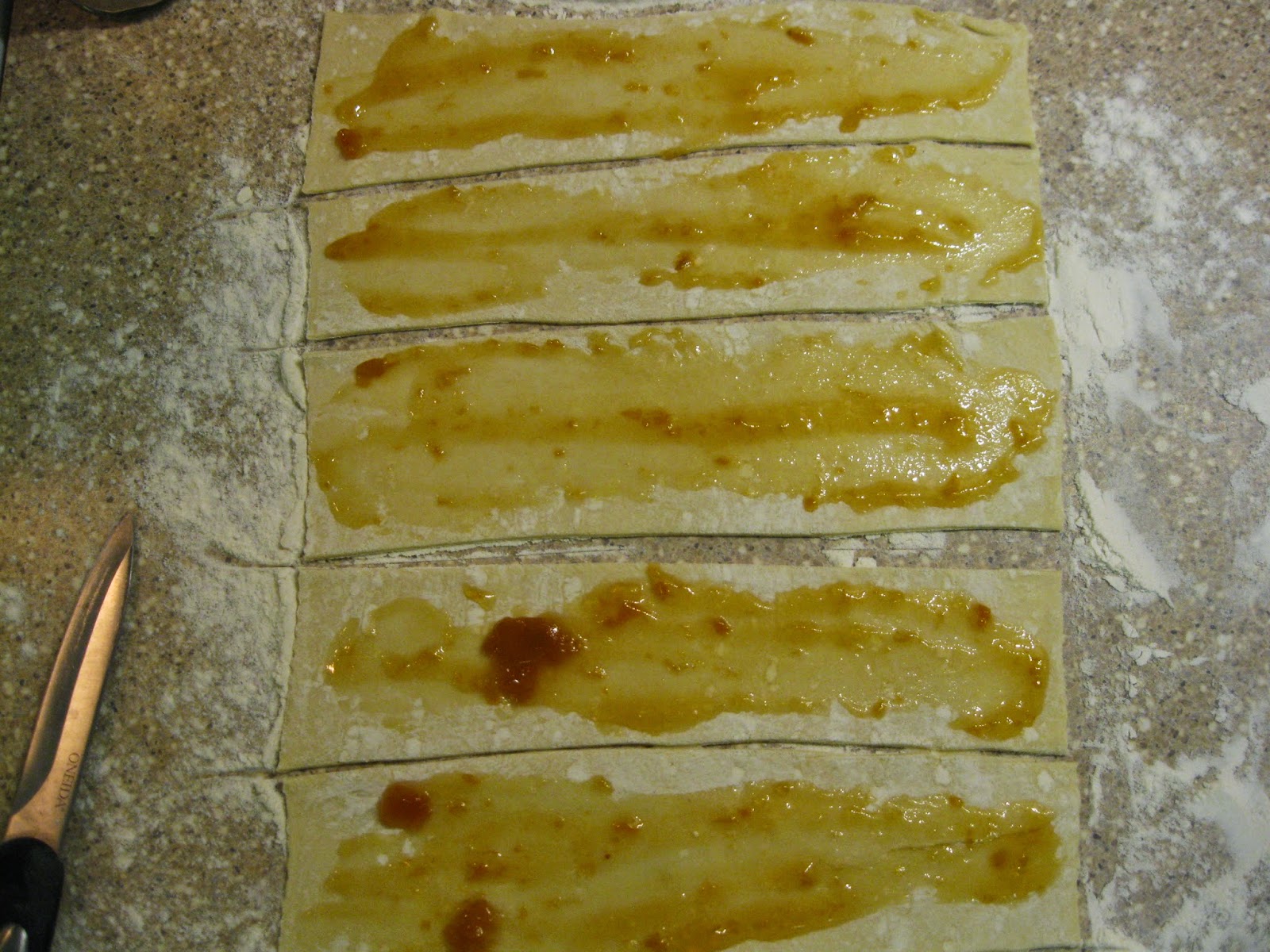 Lay the cooled apple slices (about 5-6 per strip) along one edge of the dough.  Sprinkle with a bit of powdered cinnamon or a bit of cinnamon sugar and fold up the bottom edge.  No need to be fussy neat here.
And now is as good a time as any to start pre-heating your oven to 375 degrees. 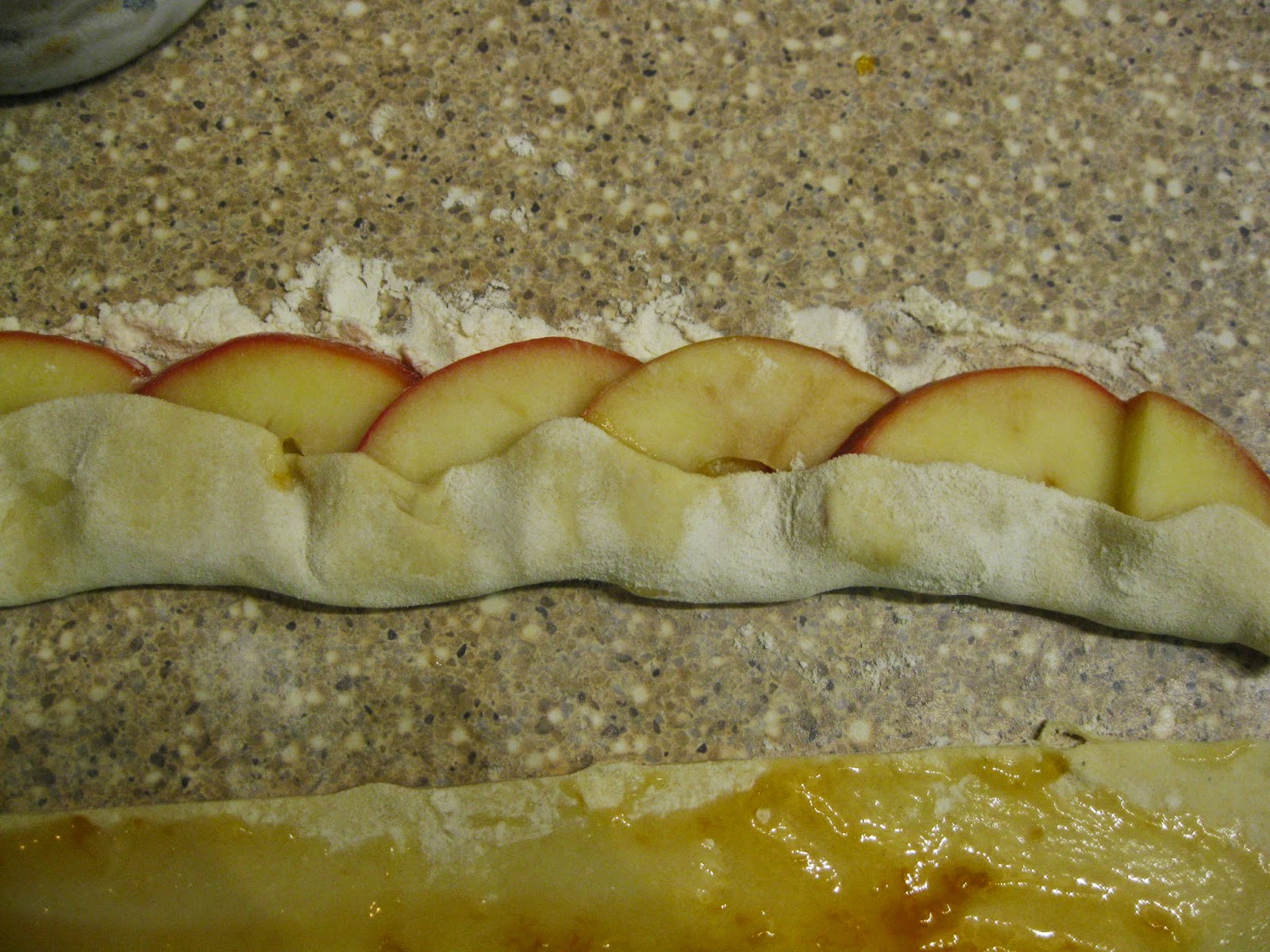 Starting at one end, roll the dough and apples slices around and around until you have a little rosette.  Pop each one into a greased muffin cup.   Here are my six ready to bake. 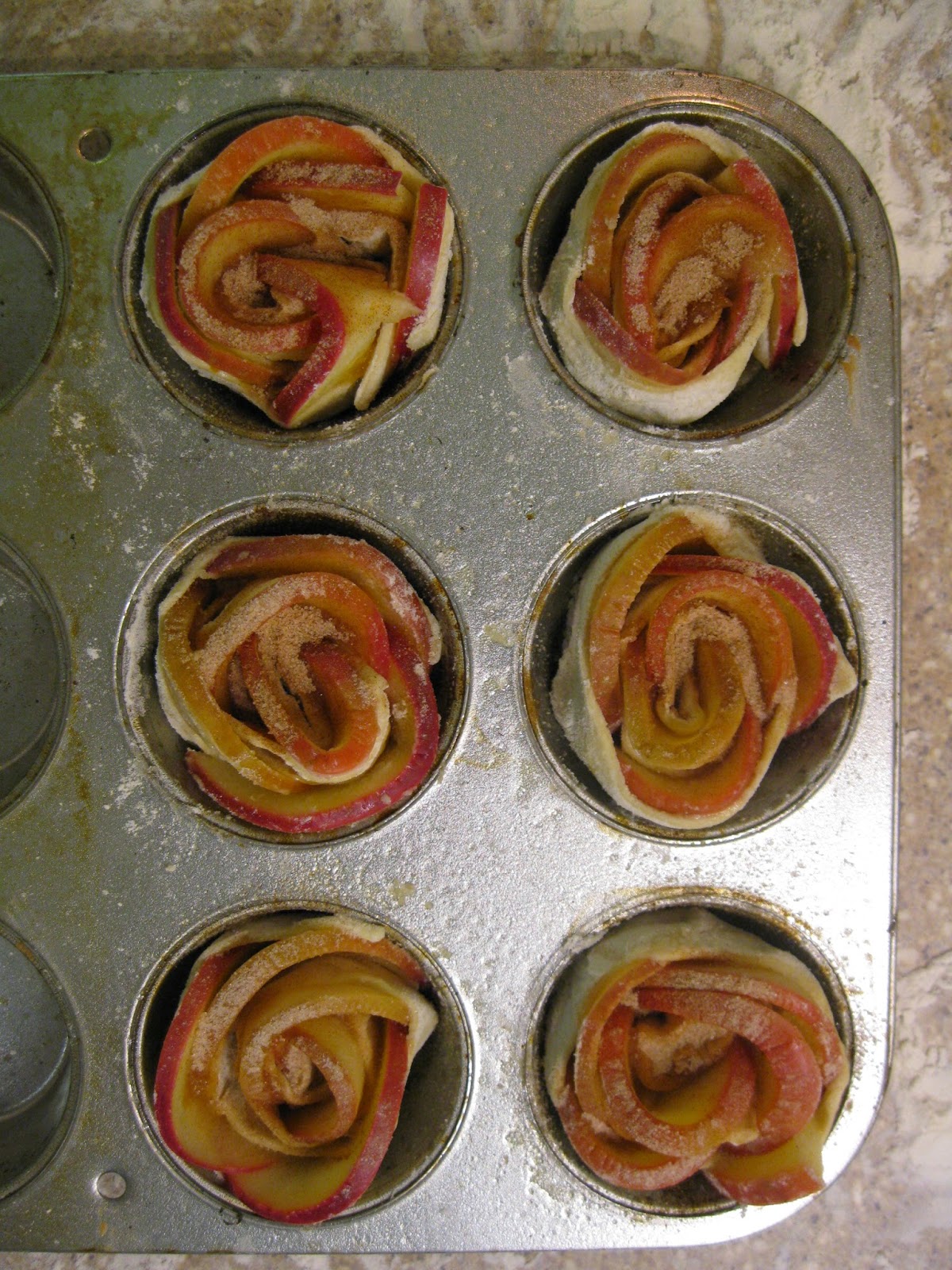 And here they are about 45 minutes later...... watch carefully the last few minutes as the apples may start to brown too much and we don't want crispy/burnt apples! 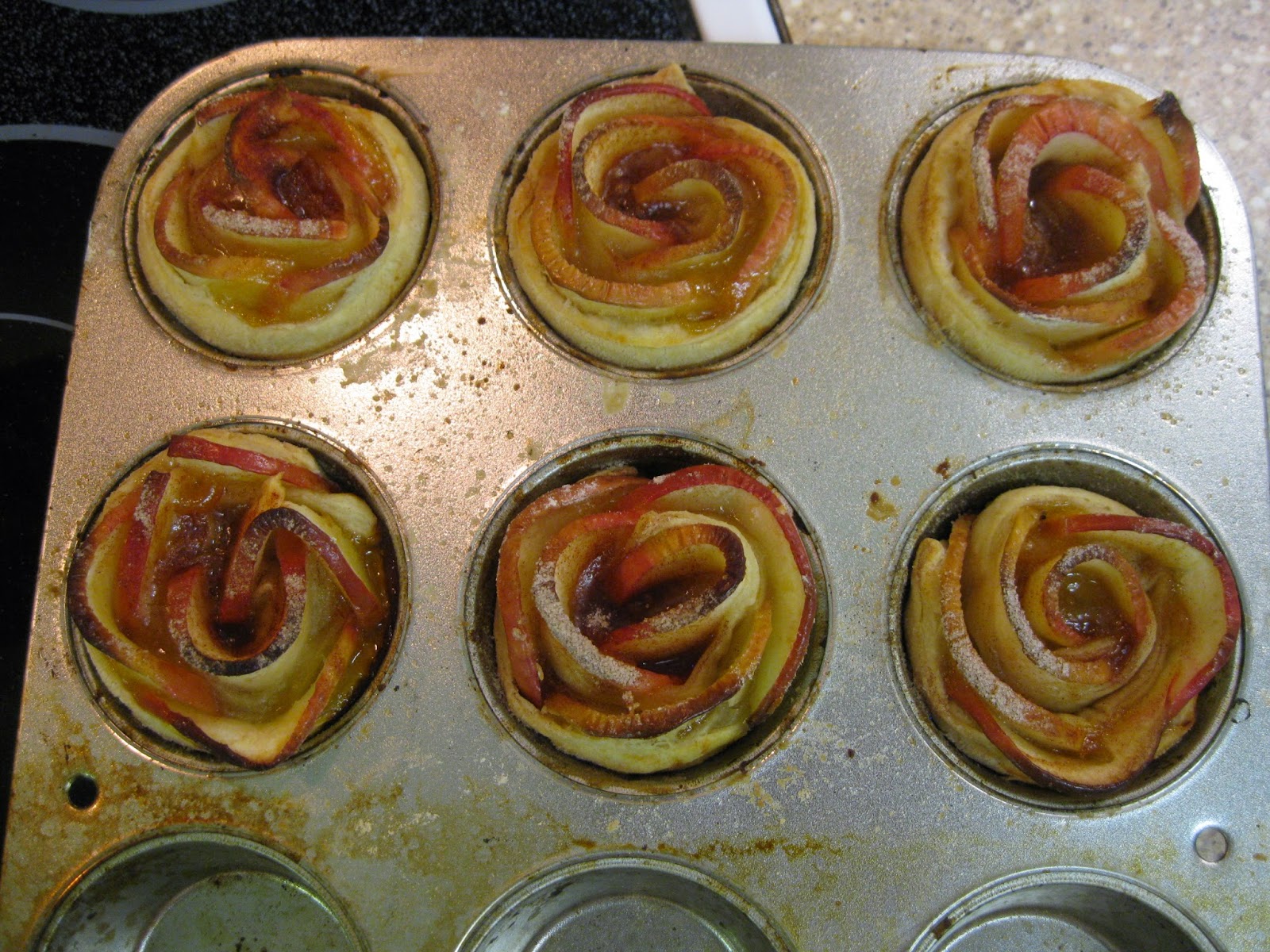 Remove carefully to a cooling rack..... and admire your handwork ;-} 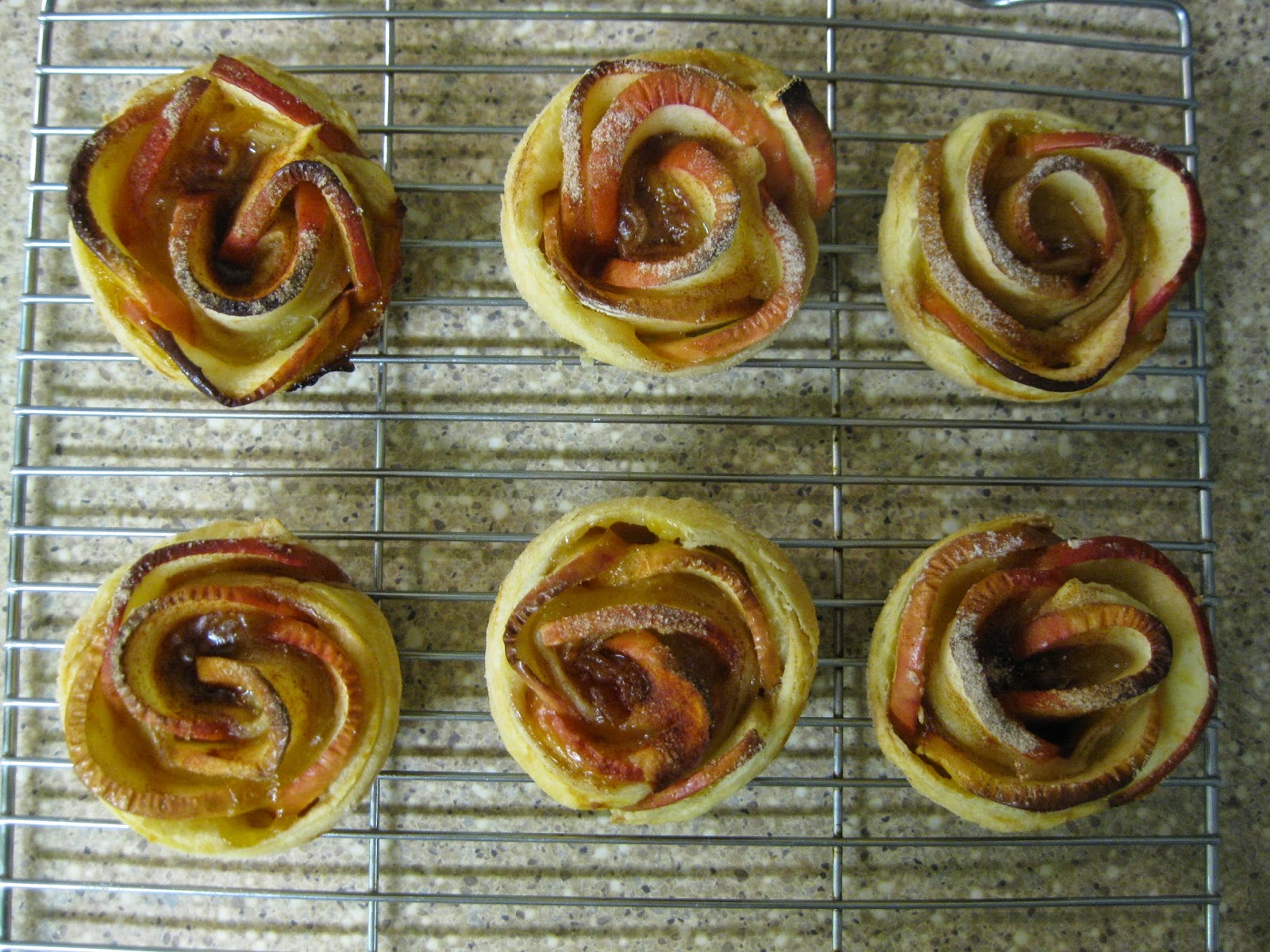 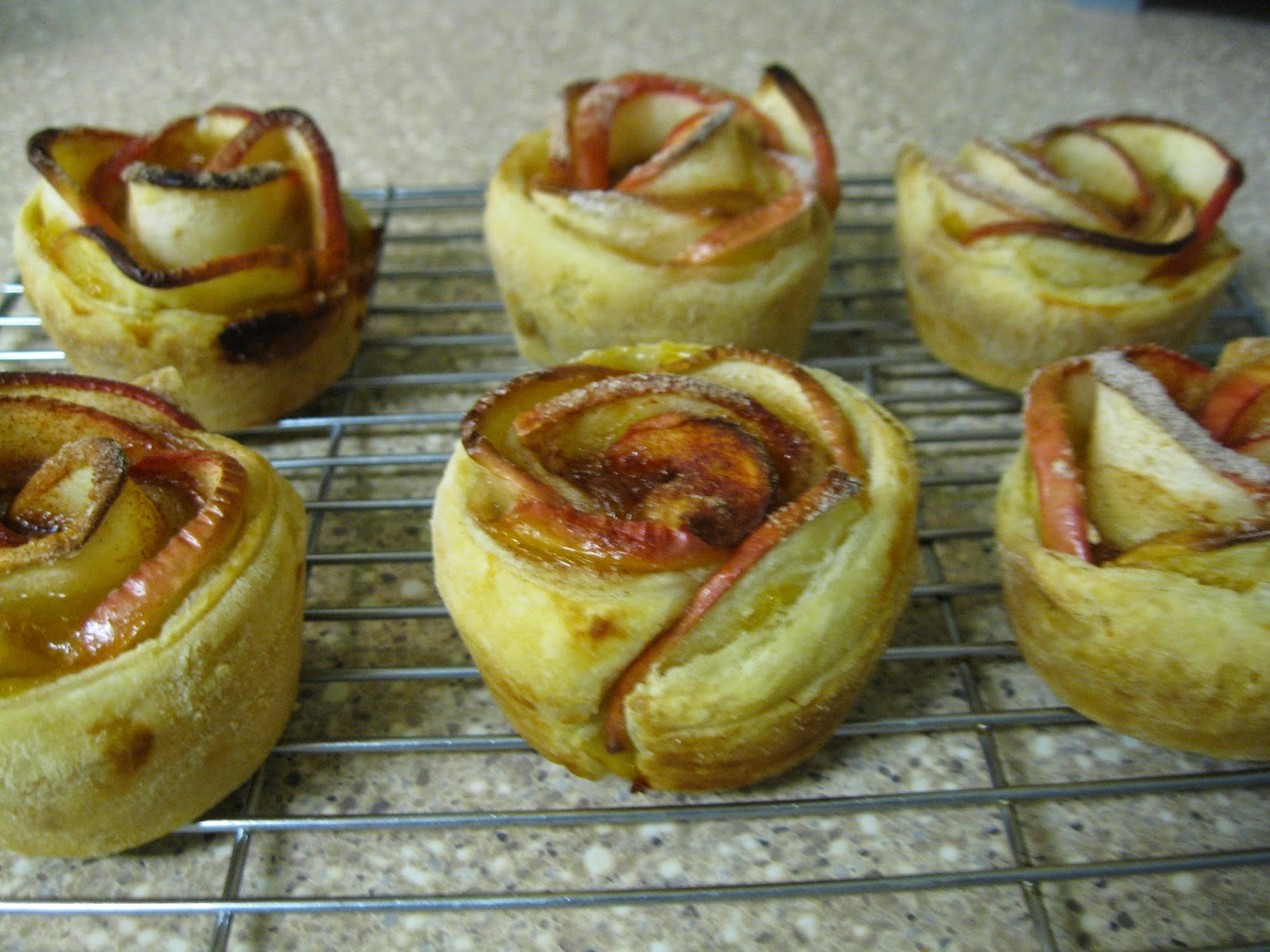 The rosettes are thoroughly cooled in these next two photos and I couldn't resist doing a bit of amateur food staging.  A paper doily on a pretty dessert plate, a little bit of greenery (non-toxic of course!) two raspberries or other fresh fruit and a sifting of 10X sugar.  Voilá!

This project takes a bit of time but is really quite easy and the results are very "uptown" as they say in the American Midwest.  Pretty tasty too and a nice light dessert after a heavy meal when you just want a bite or two of something elegant and sweet.  Bon appétit! 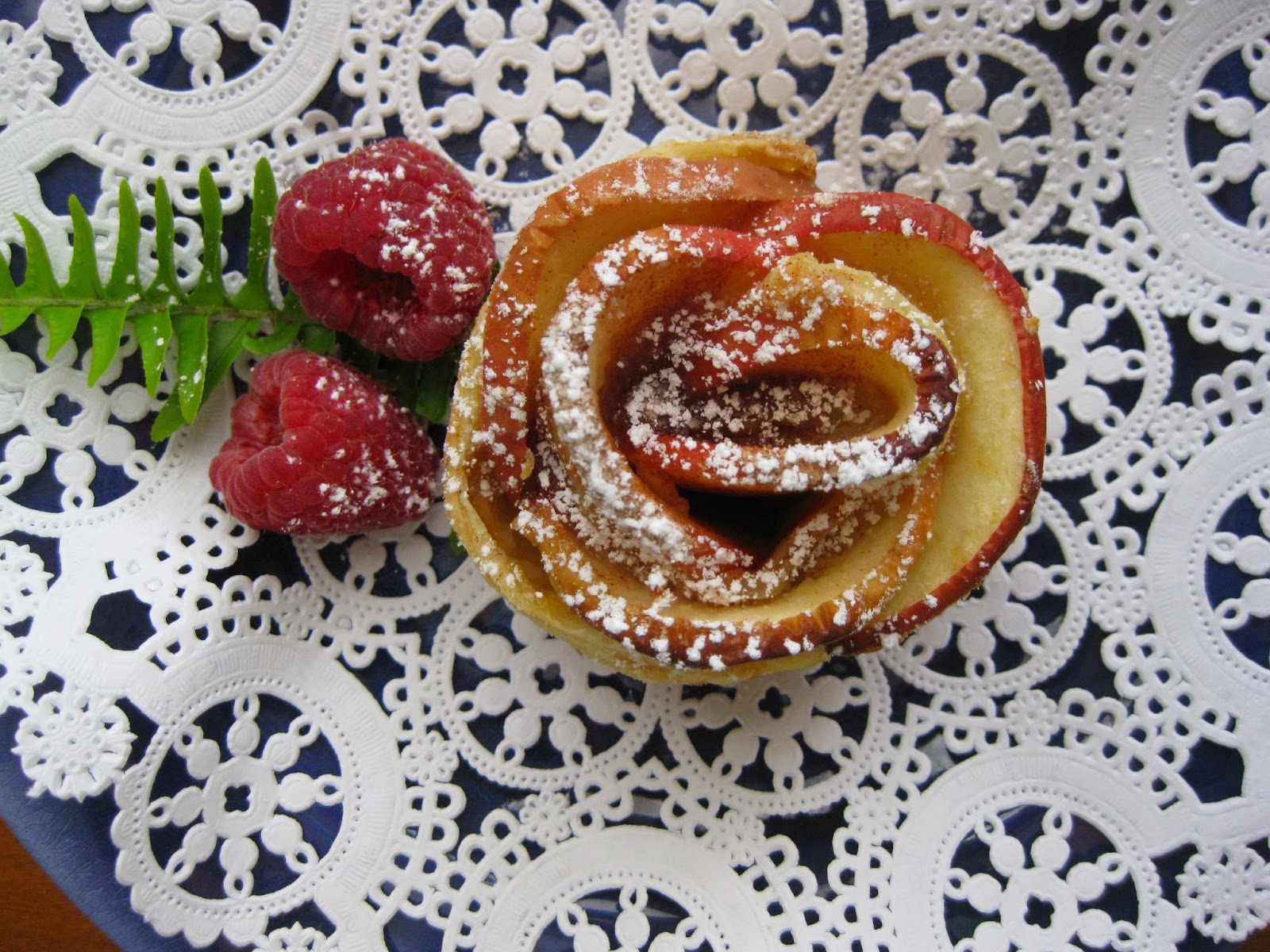 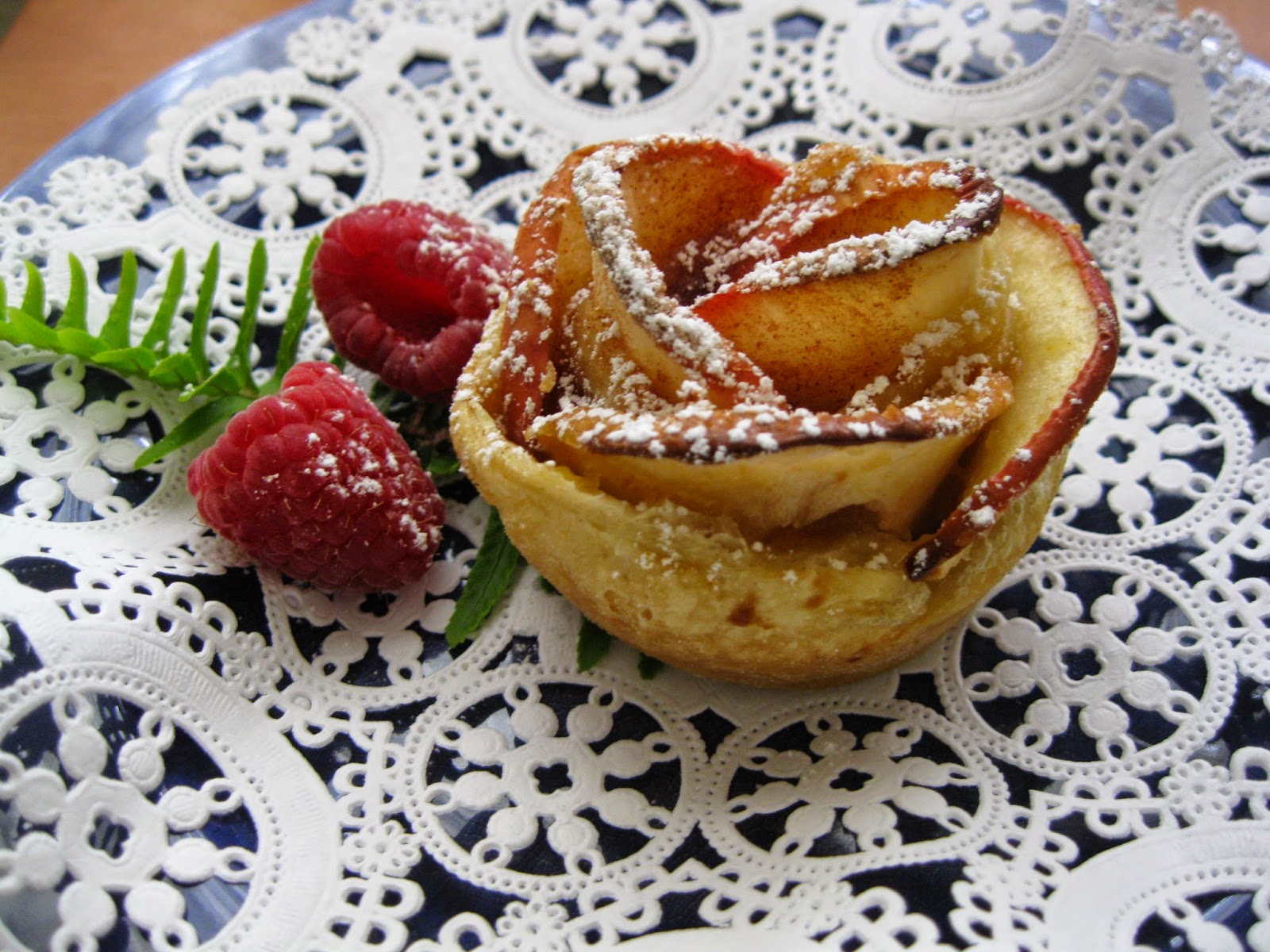 arts4all
Having always been a student of the art of living large, I look for the beauty in most people and situations, and am a keen observer of my surroundings. I love color, fresh food, music with a beat, and dancing.